You are here: Home › Argos Reveals Top Toy List For Christmas 2017
By Ralston Paes on June 23, 2017 in Toy News
ToyBuzz spends hours and hours finding the stuff that you will love. Just so you know, Toy Buzz may earn a small commission when purchasing through the many links on this page. 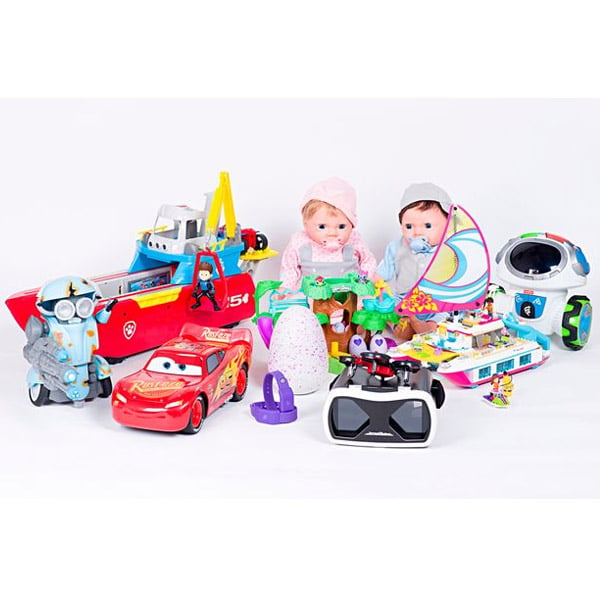 It may only be summer but Argos, a leading retail giant in the United Kingdom, officially unveiled its annual Top Toy List for Christmas 2017. This list highlights what the company predicts to be the hottest and top toys for Christmas 2017. Argos’s team of buyers literally spent months handpicking the best of the best toys that they believe will be on top of children’s Christmas wish lists.

So what toys are expected to fly off store shelves this Christmas? According to Argos, Lego toys and tech toys are anticipated to be among the hottest toys and gifts for the holidays. For tech toys Luvabella, Hatchimals, Lego Boost, and Fisher-Price’s Teach ‘n Tag Movi are expected to be among the hot sellers. You may recall the Hatchimals caused quite a last minute toy craze last year in the United States. Could it replicate that success again this year with the Hatchimals CollEGGtibles, small collectible versions of the popular Hatchimals?

Without further adieu, we proudly present to you Argos’ Top Toy List 2017. Please note these toys and gifts are not presented in any particular order.

Argos’s Top Toy List encompasses a good mixture of child-favorites with tech-infused gifts. According to Argos, there are opportunities abound for families to choose kid-friendly technology this holiday season. LEGO Boost allows kids to build five different models and bring them to life with simple coding via a companion app. Fisher-Price’s Think & Learn Teach ‘n Tag Movi is a robot play companion that encourages active play and teaches critical thinking skills as well as how to follow directions. SoundMoovz is an innovative wearable technology that allows kids to create music with movement. In the U.S., this device will be marketed as BeatMoovz with similar functionality.

With all of these hot toys on the market and Christmas just twenty-seven weeks away, it’s time to start saving up if you want to get your child one of these top gifts! Interestingly, Argos conducted a survey of 1000 parents with children and discovered that several parents are planning on purchasing gifts earlier this year. Approximately thirteen percent of parents indicated that they already have begun shopping for gifts for their kids. Meanwhile, nearly one-third of respondents plan to make toy gift related purchases this summer. In relation to summer toys, ToyBuzz has conveniently created its Best Outdoor Toys for Kids 2017 and Best Outdoor Toys for Toddlers 2017 lists to generate some helpful gift ideas. Lastly, the survey revealed that more than half of participants anticipate on making a large gift purchase for their children with some stocking stuffers as well. So what did you think of Argos’s Top Toy List of 2017? What is your favorite toy on Argos’s Top Toy List? Was there anything that you believe should have made the list but did not? Let us know in the comments below.