You are here: Home › Best Nerf Guns of 2017
By ToyBuzz on in Gift Ideas By Interest
ToyBuzz spends hours and hours finding the stuff that you will love. Just so you know, Toy Buzz may earn a small commission when purchasing through the many links on this page. 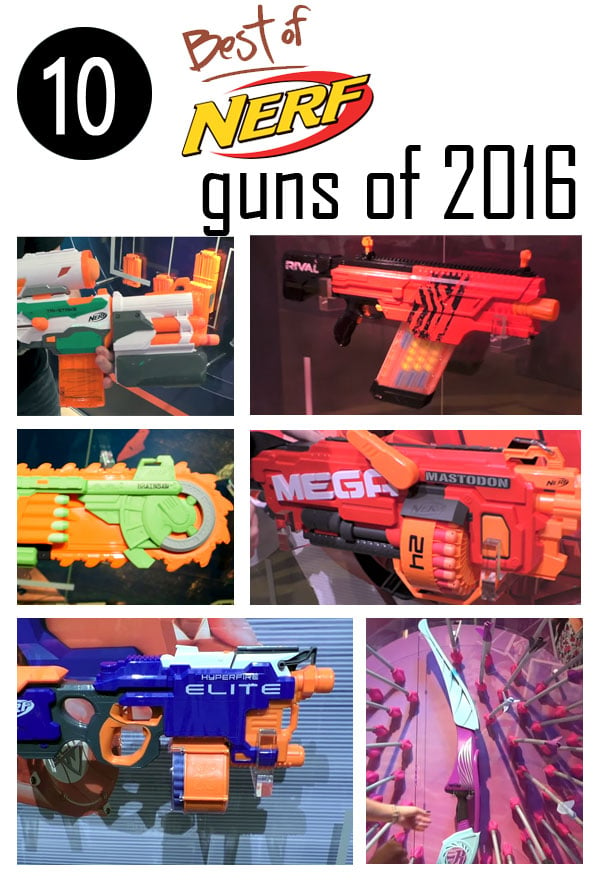 At Toy Fair 2016, Hasbro revealed all the new Nerf guns of 2016. We got an exclusive look at all of the upcoming Nerf blasters that will be hitting shelves later this year. With so many cool new Nerf guns coming out, we decided to compile a list of all the best Nerf guns of 2016 that you are going to want to add to your 2016 Christmas holiday wish list.

What are the top Nerf guns of 2016? This year we are getting the first fully automatic Nerf Rival blaster, the first fully automatic MEGA blaster, and the fastest firing Nerf gun ever. With these guns, you are sure to dominate the battlefield. Strap on some extra ammo and grab one of the cool Nerf guns coming out this year. Let the Nerf Wars begin! 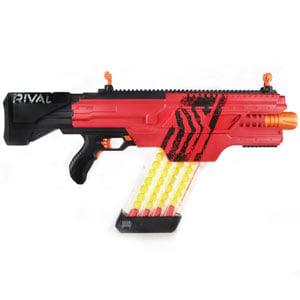 Last year Nerf launched the Nerf Rival line for 14 year old boys and up. With guns that fire high impact foam balls over 70MPH, these popular Nerf guns are about to get even more popular with the new Khaos. Firing 40 rounds in 11 seconds, this motorized flywheel blaster is the first fully automatic Nerf Rival gun. It’s the most fun you’ll have with a Rival blaster this year. With a Rambo smile on your face, you will want to empty the 40 clip as fast as you can. 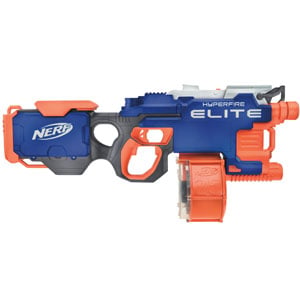 This might be one of the coolest Nerf guns ever. Firing 5 darts in one second, the motorized Nerf HyperFire N-Strike Elite is Nerf’s fastest firing blaster ever. We love the new camo design. With 5 “D” batteries located in the back, the weight is distributed nicely especially when shouldering. The thumb port, trigger area, and hand port make it easy to carry and fire. It’s even got cheek rails. With an included 25 dart barrel, you have to go easy on the trigger or the darts with be gone in close to 5 seconds. 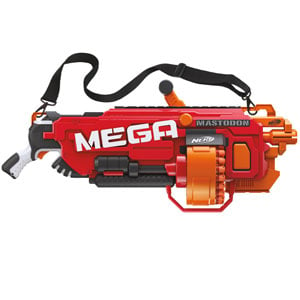 There is a reason Nerf named this after a giant prehistoric animal. You won’t believe how massive and powerful it is. Close to about 4 feet, it makes you feel small. Powered by 6 D batteries, you almost need the shoulder strap for lugging it around. It’s super fun to shoot as this 24 dart capacity blaster is the first automatic Mega blaster. Simply rev up the fly wheel and press the trigger. Using the over sized mega foam darts, this thing packs some serious power with distances close to 100 feet. 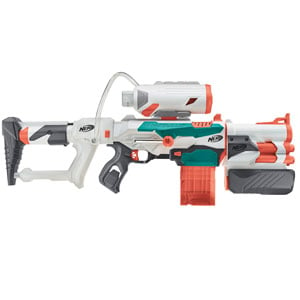 This is no ordinary blaster. It’s actually 3 blasters in one. Using a bolt action system with integrated slam fire, it fires 10 Elite darts, 4 over size Mega darts , and a foam missile. The coolest part? All 3 blasters can be mounted on the main gun or you can take them apart and mount the parts on other modulus blasters. 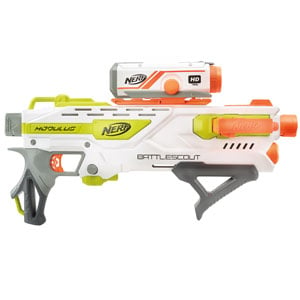 A Nerf gun with a camera? Put an inexpensive detachable 720P HD camera on a Nerf gun and it’s an instant success. With the Nerf Battlescout, we can finally record Nerf wars with our friends. The actual gun is a manually primed spring blaster with a unique 10 dart clip that is fed sideways into the gun. So your recorded videos aren’t going to be drowned out by whirring noises. The best part? The camera can be mounted on any compatible rail blaster. 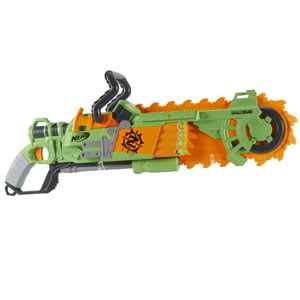 When you are equipped with the Nerf Zombie Strike Brainsaw, no zombie is going to want to get close to you. This pump action blaster fires 8 Zombie Strike Elite darts at brain hungry hordes. The coolest part? It has a working foam chain saw straight out of Gears of War. You simply pull the cord to rev it up. Don’t forget the grimace on your face. 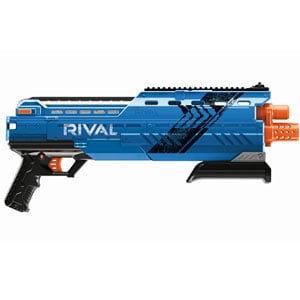 Firing two 70 MPH rounds at a time, this blaster is sort of the Rival version of the Rough Cut. Requiring no batteries, it requires a pump action to fire every shot. With a total of 24 foam rounds, it comes with two 12 round clips. Every squeeze of the trigger is twice as fun. 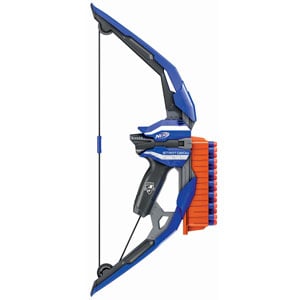 With an integrated clip that holds 15 foam darts, this bow is the highest capacity Nerf bow. The coolest part? It’s the first clip fed bow which means it automatically reloads every time you pull back the draw string. It’s like pulling darts out of the air every time you fire. 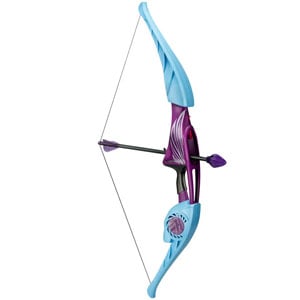 Measuring over 4 feet tall, the size of this bow is freaking ridiculous. Billed as the largest Nerf Rebelle bow ever, Hasbro claims this also the farthest shooting bow with a range of up to 100 feet. The largest Nerf bow ever calls for larger 24 inch arrows with compressible tips and rubberized fins. When you pull the dart back, a rest pops up helping to stabilize the dart. There is even an adjustable sight. Even Katniss Everdeen would love this. 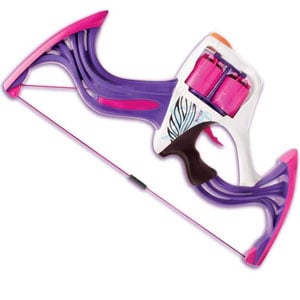 Don’t you hate reloading your bow? With a total of 10 darts, Nerf has invented the highest capacity bow in the Rebelle line. We like the fantasy inspired look of this bow with its thick curvy arms. The coolest part? It has 2 chambers that hold 5 darts a piece. When one chamber is empty, you simply use the trigger to flip to the other chamber and continue firing away.

What are your top rated Nerf guns of 2016? Let us know in the comments.